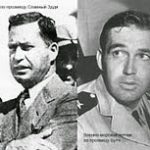 Here are two stories and both are absolutely true – and worth reading!  The first began on 5 September 1893 when a son was born in St. Louis, MO to Irish-American parents Patrick Joseph and Cecilia Malloy O'Hare. Then named him Edward and he grew up to be a successful lawyer. He married Selma Louth who gave him three children: Edward (1914), Patricia (1919) and Marilyn (1924).  In 1927, Edward moved to Chicago in hope of finding a better life. At the time, Al Capone virtually owned the city and was involved in everything from bootleg booze to prostitution. Capone needed a good lawyer and Eddie … END_OF_DOCUMENT_TOKEN_TO_BE_REPLACED 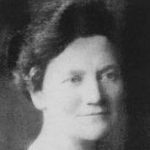 On March 27, 1872, Mary MacSwiney (Maire Nic Shuibhne) was born in Surrey, England, of an Irish father and an English mother. She grew up in Cork beset by illness which culminated with the loss of an infected foot. Educated as a teacher, by 1900 she was teaching in a convent school. Her mother's death in 1904 led to her return to Cork to head the household and secure a teaching post back at St Angela's. The MacSwiney household was intensely separatist. They read Arthur Griffith newspaper, although they rejected his dual monarchy policy. She refused to join Griffith's Sinn Féin because she … END_OF_DOCUMENT_TOKEN_TO_BE_REPLACED 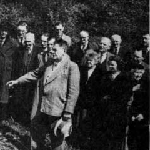 Robert ‘Bob’ Monteith was the third son of four with five sisters born March 1, 1879 in Newtownmountkennedy, Co. Wicklow to Joseph (Cavan) and Mary Dillon (Wicklow) Monteith. He was baptized in the Episcopal Church in the diocese of Glendalough. At 16, he joined the British army claiming to be 18. After seeing action in India and Africa, he was honorably discharged on 21 March 1903. Back in Ireland, he secured a job in the Civil Service at an Ordinance Depot in Dundalk, Co. Louth. On weekends would cycle to Dublin to see his parents and siblings. One weekend, they took in a theater … END_OF_DOCUMENT_TOKEN_TO_BE_REPLACED 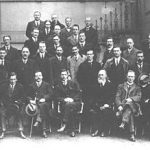 The end of WWI on 11 November, 1918 was followed by a general election in December. Ireland at the time was still suffering from post-1916 animosity and restrictions by the British government. The death of one of the many interned Volunteers, Richard Coleman, on 9 December was alleged by Sinn Féin to be indicative of the mistreatment of prisoners. Coleman’s funeral procession through Dublin bought that Republican party valuable support in the coming election. Of the 105 Parliamentary seats contested in Ireland, Sinn Fein won 73, Unionists won 26 and the Irish Parliamentary Party (IPP) … END_OF_DOCUMENT_TOKEN_TO_BE_REPLACED 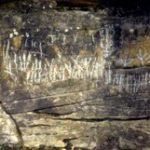 In 1982, archeologist Dr. Robert Pyle investigated a petroglyph, or rock carving, in Wyoming County, West Virginia. Many such carvings exist whose origins are shrouded in mystery, but Pyle thought this one unique for the carving looked like early runic writing.  He lychen-dated it as having been carved between 500 and 700 AD.  He recorded every detail of the carving in 18 separate visits, and gave the story to a local newspaper.  A reader clipped the article and sent it to the West Virginia Chamber of Commerce which published it in their periodical: Wonderful West Virginia.  A copy of the … END_OF_DOCUMENT_TOKEN_TO_BE_REPLACED 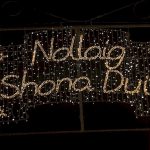 The Christmas season in Ireland is a happy combination of modern and ancient customs that combine to bring a unique meaning to this special time of year.  While Christmas shopping, decorated trees, and Santa Claus are evident everywhere, traditional customs that signify the true meaning of this holy season still remain in small towns and villages where some people still celebrate the holy feast as their ancestors had for generations. On Christmas Eve, the windows are decorated with garlands of holly and ivy with candles centered in each -- often in a hollowed-out turnip for support.  The … END_OF_DOCUMENT_TOKEN_TO_BE_REPLACED 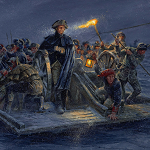 There were a few Irishmen living in and around Trenton, NJ prior to the Revolutionary War. Among them were Paddy Colvin and Sam McConkey, who ran two Delaware River ferries; Paddy Lamb, who resided near Quaker Bridge on Assunpink Creek; and John Honeyman, a retired British soldier, now a butcher and cattle-dealer in nearby Griggstown. They were all there during a very special Christmas adventure. Toward the end of 1776, George Washington’s patriot army retreated from New York through New Jersey, headed for the Delaware River with the British army in hot pursuit. On December 1, he sent … END_OF_DOCUMENT_TOKEN_TO_BE_REPLACED 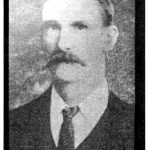 Edward Walsh was born in Dublin in 1873 and lived with his family in the North Inner City around the Bolton Street area. Edward married Ellen in 1894 and from that date on, he and his new family lived in the run-down tenements on Henrietta Street and, at the time of the Rising, on Dominick Street. By then they had 2 children, Christopher (20) and Helena (11). He worked as a Carter for McMasters in Capel Street. Edward joined the Hibernian Rifles just after their founding. The Hibernian Rifles were a military wing of the Ancient Order of Hibernians American Alliance. Many of the … END_OF_DOCUMENT_TOKEN_TO_BE_REPLACED 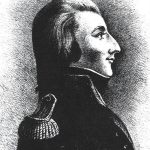 Up to the 20th Century, the closest that the Irish ever came to complete independence happened when Irish Catholics and Protestants united in a brotherhood of purpose for the benefit of all. It started after the American Revolution. The 1777 surrender of General Burgoyne at Saratoga in the American Revolution was followed by the alliance of France to America's cause. The British began to fear an invasion of either England or Ireland. In April 1778, John Paul Jones crossed the Atlantic, captured two British ships, then boldly sailed into Belfast Bay in broad daylight, and sank a British … END_OF_DOCUMENT_TOKEN_TO_BE_REPLACED 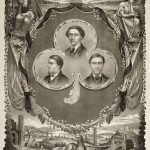 After the American Civil War, the Fenian brotherhood felt the time was right for a long-awaited national rising in Ireland. In February 1867, a small local rising in Cahirciveen, Co. Kerry, finally prompted a national rising which took place on 6 March. Thousands of Fenians took to the hills, but poorly armed, they were easily put down and hundreds were jailed. Unaware of the failure of the rising, support was sent from America’s Fenians. On 23 May, the ship Erin’s Hope with 40 Fenians (former Civil War officers), 5,000 firearms and several artillery pieces on board sailed into Sligo … END_OF_DOCUMENT_TOKEN_TO_BE_REPLACED 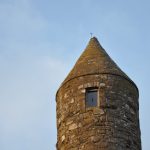 When one sees Round Towers, it’s only natural to think of Ireland. These impressive monuments from the past have a long, storied and mysterious history; long – because they date back to medieval times; storied – because there are many tales surrounding their purpose; and mysterious – because no one knows the names of those bygone architects who built them. They are mostly found in Ireland, where they were built, sometime between the 7th and 10th century according to the 1911 Encyclopedia Britannica. Their use has provided many theories. Some say they were built as a defense against … END_OF_DOCUMENT_TOKEN_TO_BE_REPLACED 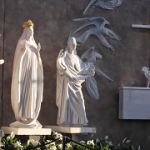 By the mid 1800s, most of the fertile land in Ireland was in the hands of landlords, forcing the Irish to survive on smaller plots, until they became totally dependent on the crop that could produce the most yield per acre – the potato. It was difficult, but at least they weren't starving for potatoes are a remarkable source of vitamins and minerals. Then late on August 20, 1845, a potato fungus was discovered at the Dublin Botanical Gardens. The following day, August 21, is a date remembered in Irish history as the first day of An Gorta Mor - the Great Hunger. Within the week, reports came in … END_OF_DOCUMENT_TOKEN_TO_BE_REPLACED 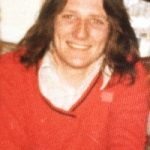 We remember the Patriots of 1916 whose executions began on 3 May and extended until 12 May. However, 75 years later on 5 May, another patriot joined them in Tir na nOg and should also be remembered. It was 1981 and a young 26-year old patriot named Bobby Sands had succumbed to a self-imposed hunger strike. The spin-doctors in the British Information Service were at wits end preparing propaganda, the Irish Diaspora around the world were protesting, and the media had a field day. Sadly, few knew or understood – even while it was happening – the reasons why. Unable to stem the rising tide of … END_OF_DOCUMENT_TOKEN_TO_BE_REPLACED 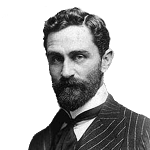 The last patriot to be executed for his part in the Easter Rising of 1916 was a Protestant from Northern Ireland further disproving the North vs South, Catholic vs protestnat mythology promoted by the British to divide and conquer. His name was Roger Casement and he was born in Antrim on September 1, 1864 to a Protestant father and Catholic mother. At 17, he went to work for the Elder Dempster Shipping Company in Liverpool; three years later he shipped out as purser on one of the company's ships headed for the west coast of Africa. There in 1892 he joined the British Colonial Service and was … END_OF_DOCUMENT_TOKEN_TO_BE_REPLACED

In March we think of St. Patrick and his story is on our national website AOH.COM, so this month we will tell of a remarkable military unit named for our patron saint. When America was a young country, not yet matured with the wisdom born of experience, we made mistakes. The acceptance of slavery, the treatment of Native Americans, prejudice against Catholics, and armed opposition to labor unions, were but a few. But the wisdom of our founding fathers and the form of government they established gave all people a voice, and in time saner heads prevailed in the electoral process and the nation … END_OF_DOCUMENT_TOKEN_TO_BE_REPLACED 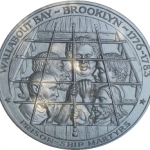 Wallabout Bay is small body of water along the northwest shore of Brooklyn, NY. In 1801, a settlement called Vinegar Hill was built on that bay to attract Irish immigrants to settle there and provide the labor to build the Brooklyn Navy Yard which opened in 1806. However, Vinegar Hill was built on an area which, 20 years earlier, had seen incredible horror! During the American Revolution, the British had captured thousands of soldiers, sailors, and even private citizens who would not swear allegiance to the Crown. When they ran out of jail space to house their prisoners they used ship hulls, … END_OF_DOCUMENT_TOKEN_TO_BE_REPLACED

World War II brought change to Northern Ireland as Loyalists and Nationalists who shared the same bomb shelters broke down the barriers of prejudice erected by the Unionist Ascendancy to keep them divided. The war also created jobs and the small measure of prosperity experienced by the nationalists satisfied many grievances. After the war, England rebuilt the barriers to maintain control of the north. Churchill publicly blasted the Irish Free State for neutrality during the war despite the cooperation extended to the allies by the Irish and the tens of thousands of Irish volunteers in the … END_OF_DOCUMENT_TOKEN_TO_BE_REPLACED 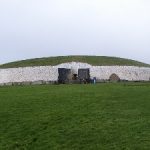 The Boyne Valley, some 20 miles northwest of Dublin in County Meath, is one of the most remarkable sites on earth, for there stands three monuments to the early settlers of Ireland, and their civilization. At first they appear to be huge mounds or hills, but closer investigation reveals them to be man-made structures. They are, in fact, more than 5000 years old and the oldest, still-standing, man-made structures on the planet. They are known as Newgrange, Knowth and Dowth and celestial manifestations occur there each December. The ancients who built the mounds called them Brú na Bóinne. The … END_OF_DOCUMENT_TOKEN_TO_BE_REPLACED

Prior to the American Civil War, the regular Army was small reflecting the logic that America was best defended by hundreds of volunteer militia units. Many were little more than glorified fraternal organizations, filled with men who liked to parade, drink, and sometimes drill. New York had the Continental Guards, German Black Sharp-shooters and Hungarian Kossuth Rifles among others. Not to be outdone, the Irish formed the O'Connell Guards, Irish Rifles and Irish Zouaves. The more serious of these units were mustered into a formal state militia. On October 12, 1851, the 69th New York State … END_OF_DOCUMENT_TOKEN_TO_BE_REPLACED 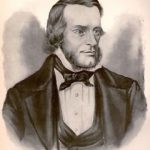 There are few events in Irish history as tragic as the death of Thomas Osborne Davis. He was a rare man whose impact on the history of Ireland has never been truly appreciated. Born in Mallow, Co Cork on Oct 14, 1814, the son of a British Army Surgeon, he was educated at Trinity College and called to the Bar in 1838, but Davis heard another call: the call of Ireland. He heard it in the voice of Dan O'Connell when the Great Emancipator visited his home town in 1842, and asked a crowd of 400,000, “Where is the coward who would not die for Ireland?” This was a fiery young O'Connell, not the … END_OF_DOCUMENT_TOKEN_TO_BE_REPLACED